Hello again from the Ross!  It’s the middle of the school holidays at the moment and last week we were busy with several events.  First of all we had the lovely Aberdeen University Conservation Society helping out with tasks all around the island.  You can see what they got up to on our facebook page: beachcleaning at Aird Fada, path clearance and removing tree tubes in Aros Park, and outwith the ranger service, also helping out John Clare, Forest Officer, with improving wildlife habitats at Tiroran Community Forest.  Thanks for all your hard work!

Catriona Hood has been volunteering with me over the last few months and this week she stepped up her efforts to help plan two children’s holiday events.  For the first one on Wednesday 6th April we also had the help of the very capable Jane Gordon-Chauvet.  Although heavy rain and hail showers prevented us from being outside as much as we would have liked, judging by the time it took to clear up afterwards, a lot of fun was had by all!  The pictures show some of our Art in Nature efforts including games of ‘Nature’s Dominoes’ and ‘The Great Circle’ along with painting stones, making recycled paper and decorating suncatchers.  Thanks for coming along everyone! 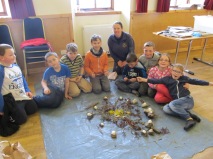 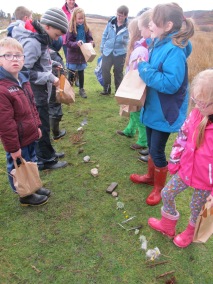 Later in the week we tried out our first ranger service event in Tiroran Community Forest. Fifteen intrepid young folk took part in OrienTREEing during which they explored the forest in groups looking for clues attached to particular trees, with the help of a tree ID guide, a cartoon map drawn by Catriona and some pre-programmed GPSs.  They had to complete a number of challenges including discovering micro-worlds with the aid of magnifying glasses, choosing soundtracks or slogans to fit the views they could see, using all their senses to get to know the trees, smelling bog myrtle buds, finding wildlife from birds to tadpoles to a delicate moth chrysalis, exploring out what lives inside dead logs, investigating human impacts on the forest over time, collecting water and sticks to prepare their own hot chocolate.  We just managed to finish before the rain but most people had fun getting wet and muddy all the same!  Thanks to Maureen and Naomi for bringing their group from Oban and to Julie Ward for her help too, also to Celia Compton for driving the community bus.  Think we all know the forest a bit better now.  This was also a taster event for the John Muir Award and its themes of Discover, Explore, Conserve a Wild Place and Share the experience with others, so along the way we heard about John Muir himself and some of his crazy exploits.  If you know any 11-16 year olds who’d like to get involved in similar events during the summer holidays just get in touch with us! 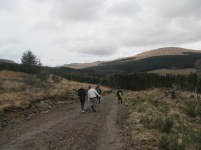