Well almost. We are half way through the season here at Mull Eagle Watch. Our chick is now 10 weeks old, which means in two very short weeks it will be starting to spread its wings and taking to the sky. Its magnificent 8 foot wind span will be a sight to see, after watching the nest so closely since the beginning of April. It hasn’t all been plain sailing (Or Soaring), with a persistent juvenile causing worry. However Scalla, our male rose to the occasion and saw off the youngster, with some very impressive ariel displays.

Back in the nest Anna patiently brooded the tiny egg for 37 days, and then A Chick! One fluffy head, the most amazing sight we could wish for. We tagged the chick when it was five weeks old. Two ringers under SNH Licence came to Craignure Golf Club, they climbed the tree with the nest in it, and put three little rings around its fully-grown feet. These rings allow us to track this chick when it leaves the nest and heads off on its adventures.  They were in and out of the nest in around 40 minutes, and gave us these pictures of our chick. Both Scalla and Anna, stayed in the area while the ringers were in the nest, giving us incredible views of them both soaring in the sky together. Not something we have seen as one parent is usually with or near the chick. An amazing experience I felt so privileged to witness (I was rather excited! ).  Then 10 weeks after hatching here we are, a fully grown White Tailed Sea Eagle chick, starting to stretch its wings getting ready to leave the comfort of its home for the last few months and start to discover new pastures! 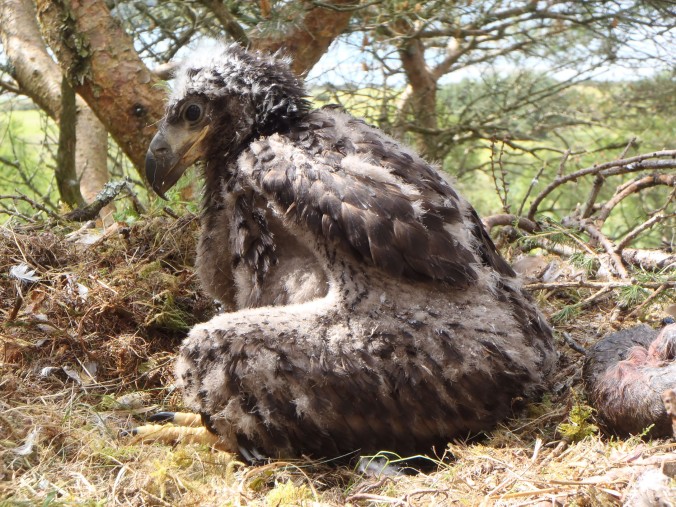 (A picture of our chick when it was being fitted with its rings, it is now twice this size!)

The other amazing wildlife here at Craignure has also kept us busy! I was lucky enough to spot a pair of Garganey. The second ever time they have been recorded on Mull!

The Arctic (and Common) terns are also keeping us well entertained, with their swooping swallow like flight and their absolutely adorable young. It is amazing to think they have the longest migration of any bird in the world! The elusive Otter occasionally graces us with its presence, I am afraid I am yet to spot one here at the gold club, I have got very good at spotting seaweed lumps that look like Otters though.

My other ranger duties are also going well, The World Otter Day event was well attended by everyone but the Otter! The nature walk at Loch Torr, held Buzzards, a distance glimpse of a White Tailed Eagle and lots of LBJ’s. Garden Warblers, White Throats, Sand Martins and Reed Warblers amongst others. 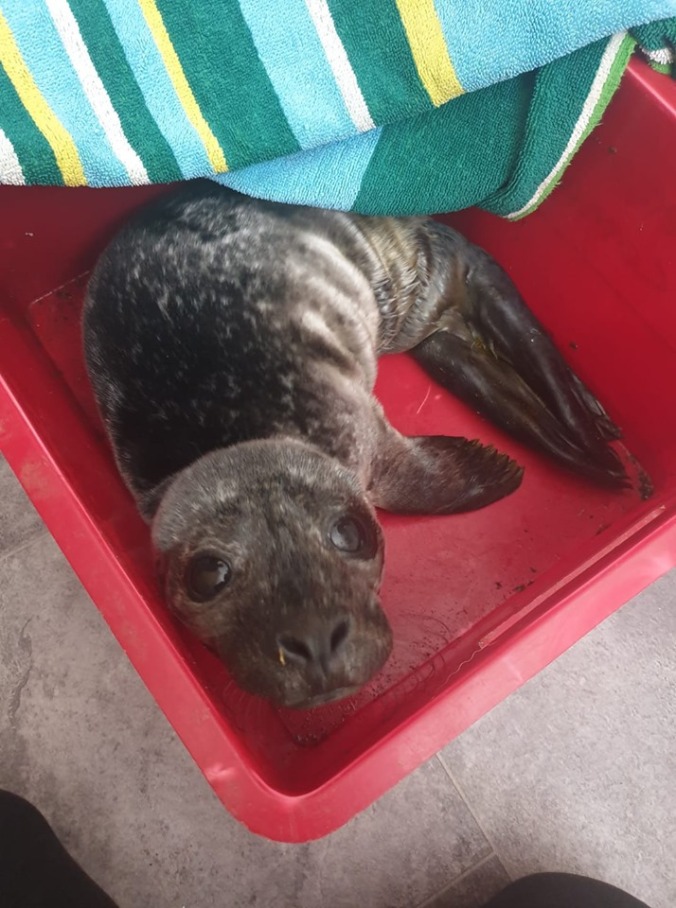 Amongst the more amazing unexpected things I have done since I moved to Mull was to coordinate and rescue a seal pup at Pennygown Campsite. I wasn’t expecting the knock on the door at half ten at night, from my landlord saying there was a pup on the beach, could I put on my uniform and be all official to help reassure people that it would be okay. Unfortunately by the time we got down there, there was people standing right by the side of the poor wee pup taking pictures. Not what the pup needed. We managed to get everyone away from the pup, and left it for the night hoping the mother would come back. Next morning there was no sign of the mother and the pup was very underweight, so I coordinated for the pup to the picked up in Oban by a Inspector of the SSPCA. Now we just had to get it to Oban! Chris, a Marine Mammal Medic and myself then managed to get the pup into a box with a towel over the top and drove it to the ferry terminal, I have never driven to carefully in my life! Then we put the pup in the luggage van on the ferry (Yes, really!) and waved it off. The pup was collected safely and taken to a temporary holding pen and given fluids and triage and is now at the SSPCA’s National Wildlife Rehabilitation Centre at Fishcross. I’m very happy to confirm that so far the pup is doing very well, he was little underweight and dehydrated, but is now much brighter, alert and very noisy! However, it’s important to note that if you see a seal pup alone you must NEVER approach or touch them, mothers will often leave their pups to feed, but will stay within sight and disturbing the pup can cause the mother to abandon it, furthermore there are risks from passing zoonotic diseases or being bitten and infection from the bacteria found in the seals mouths. It is always advised to keep your distance from seals and keep your dogs on a lead if you are concerned about a seal or a pup being on its own the best thing you can do is keep your distance and contact either your local wildlife rescue centre, the RSPCA or SSPCA or BDMLR who have marine mammal medics and volunteers spread across the UK’s coastline. 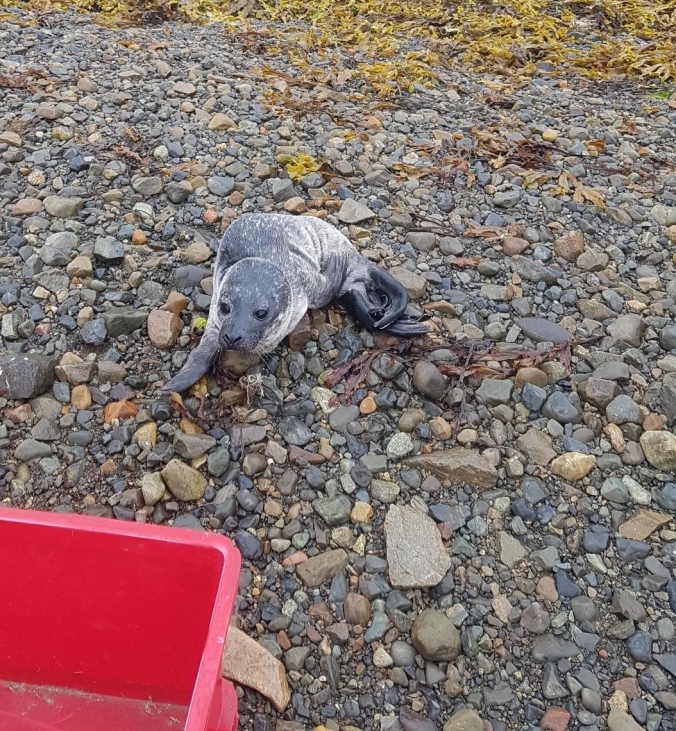 Well, that’s it for now. Events coming up include the Wild Flower Walk and Moveable Feast, at Treshnish Cottages and Staffa Sea Watch, both Tomorrow, 17th July, and there is lots more. Keep an eye on the events page for more throughout the season. Keep you eye in the sky for Eagles, especially young in the next few weeks!

Many thanks for reading,