With the busier season well and truly underway it’s time to show you a snapshot of what’s been happening down the Ross and on Iona, Burg and Staffa…

Bunessan afterschool nature club continued their investigation of forests – analysing owl pellets found beneath trees at Achaban House (thanks Matt Oliver!) and finding evidence of all sorts of creatures including mice and voles.  They also made posters to say thank-you to trees for all they provide including habitats, fruit, shade and a place to play!

Also on an educational theme, I was excited to collect a box of the beautiful ‘Lost Words’ books for distribution to Mull, Iona and Tiree schools after Jane Beaton’s crowdfunder campaign raised enough money to provide a copy to every school in Scotland!  I’ve enjoyed giving these out – and if you haven’t received your copy yet it will be on its way soon!  Looking forward to making use of it to counteract the nature words disappearing from children’s dictionaries.  More information here: https://www.johnmuirtrust.org/initiatives/the-lost-words 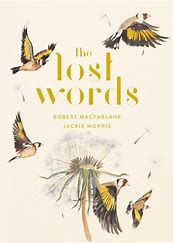 I spent a lovely day in the company of several visiting German ladies, walking near Lochbuie – we were lucky enough to see both a golden eagle and a sea eagle along with a cuckoo flying, but the hoped-for dolphins remained elusive!

I’ve enjoyed hosting my colleague Andrew Warwick for a week of renovations at Burg bothy, it’s looking so much better already so huge thanks to him and the volunteers who helped too!  Also thanks to the Argyll Members’ Group of the National Trust for Scotland whose generous donation paid for materials.  Still quite a bit of work to do before it’s usable again though.

Making the most of some spectacular sunny days amongst the showers, volunteer Terry Ward and I spent a night on Staffa to complete a dawn survey of its black guillemot population the next day…his own account of the trip follows in green text along with some of his great photos!

Emily picked the best two days in April to do the black guillemot survey on Staffa – calm seas and clear blue skies. We set out on the 2pm boat on Friday afternoon from Fionnphort and had an uneventful crossing over the 12km to Staffa.

On arrival we popped quickly down to the entrance to Fingal’s cave to inspect the warning signs which have been installed after some of the footpath was washed away in the winter storms. We established that some adjustments would be necessary and added the job to the ‘to do’ list for our time on the island.

We headed back to the steps and carried our camping gear up to the cliff top. Once I’d got my breath back we headed over and down to Port an Fhasgaidh and dumped the gear at our ‘campsite’ near the rocky beach. There is a small spring here and some almost flat grassy ground for pitching tents, plus a fabulous view of sea cliffs and caves, and birds.

The first job was litter picking – Staffa picks up its fair share of the plastic rubbish that has been in the news so much recently. We swept over the accessible bays in the middle of the island and filled around 8 bin bags. We could have filled dozens more if we could get into the appropriately named Float Cave – but this is accessible only by abseiling, or by boat.

Returning to our campsite we set up tents, after some careful searching and testing of potential pitches. Emily has a very practical method of testing a likely spot by lying down on it, to find any hidden bumps and lumps in the grass. The spot I chose ended up being quite near a cliff edge, which I regretted when I woke at 3am and had to leave the tent to heed a call of nature.

Once the tents were up we headed over to the east side of the island for tea. There is an old pink buoy on a fence post which marks the best spot for watching the puffins. Emily broke out her trusted Trangia camping stove and cooked up a wonderful vegetable couscous. I provided wagon-wheels and chocolate raisins. After this we walked the coast up to the north end of the island rehearsing the route for the following morning’s survey.

One of the things I wanted to do on Staffa was search for signs of otters so I was very pleased to find otter spraint mounds around some fresh water pools. On returning to base Emily spotted an otter trail and a series of spraint mounds including one right next to her tent! How did we not see that earlier …? See if you can spot the otter trail and spraint mound in the photo below.

I was glad to get up at 5am to start the survey. Despite being late April it was a cold night and I now realize I need a warmer sleeping bag! We walked the island from south to north, Emily up the west coast and myself up the east. I was a bit nervous (thinking of last year’s feral goat survey at Burg where I counted a grand total of zero) but once I saw a pair of black guillemots very close to shore at the pier I got into the swing of it. All the birds we saw were already on the water – so obviously they had made an even earlier start then we had.

A few things make the survey quite tricky – the birds move so you have to move briskly and take care not to double count, and also some of the birds were 50-100m out to sea so binoculars were needed to distinguish the puffins from the black guillemots. Emily counted more birds than I did – but she reassured me that was what she expected so hopefully I was reasonably accurate for a first timer.

We returned to the campsite, via the source of the campsite spring. We cleared the filter bucket of algae and slime – a lovely job which left us filthy up to the elbows.

After breakfast there was time to watch the black guillemots and shags flying back and forth from the nearby sea cliffs.

A couple of quick jobs to finish – reattaching the warning signs at the entrance to Fingal’s Cave and carrying the bags of rubbish back to the pier – then it was back to Fionnphort on the top deck of the Staffa tours boat.

At the start of May I was lucky enough to spend a few days amongst the wide open spaces of Tiree visiting the Tiree Trust and ranger Stephanie Cope who used to be part of our team here on Mull, and also John Bowler and his RSPB colleagues.  A very useful visit to share ideas and have a look at corncrake conservation and habitat management, carparking and signage, restoration of machair erosion, and visit the Treshnish Isles exhibition at Hynish and of course Tilly the community wind turbine!  Many thanks to Steph and John (and to Sarah Slorach for the photos).