Its been another few weeks since my last blog post and again, I don’t quite know where the time has gone! I’m writing this post from the mainland as my volunteer placement with Mull and Iona Ranger Service has concluded. I’ve never found the saying ‘all good things must come to and end’ to be truer and despite only being home a few days, I’m already exploring avenues which would allow me to return to the Island on a more permanent basis… Watch this space!

A view I’ll never forget! Looking out from Bunessan, across Loch na Laitaich.

My last few weeks on the Ross of Mull were as enjoyable and as busy as all the others. Emily and myself carried out the Ranger Service’s annual ‘Fun in the Sun’ events on Iona and Tiroran and the kids who came along thoroughly enjoyed themselves! I should probably mention that these events have been re-branded as ‘Go Wild’ due to the unpredictable nature of our weather… 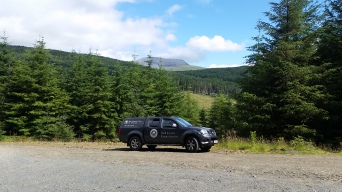 The Ranger truck with Ben More in the background

We have had archaeologists from the NTS on Staffa in the past fortnight who are trying to determine the time period of the Island’s earliest inhabitants. Prior to their arrival, we carried out storm petrel surveys in the ruined buildings and other locations around the Island to ensure that the archaeologists work would not impact their nests. In total, we found 15 nests – an increase from the previous survey!

Looking north east from Staffa during our lunch break! You can see Dutchman’s Cap in the background.

It was great that my final two weeks on the island incorporated the Ross of Mull and Iona Gala Fortnight as there was always something on to keep me occupied and distract me from my impending departure! One of the highlights was the Local Food Ceilidh on Iona. A special mention has to go to Glen’s mutton burgers which were unbelievable!

I should probably also mention that Bunessan FC won our annual 5 aside tournament, beating Tobermory 2-1 in the final!

In my final week, I carried out my own guided bat talk and walk  event which went really well! The event started with a presentation on the history, ecology and distribution of bats in the British Isles before we then embarked on a walk around Bunessan armed with bat detectors. We encountered around 5 pipistrelle bats, although we were unable to determine whether they were common or sopranos!

The Bunessan Show on the 5th of August was my last working day and Emily, Steph and myself interacted with well over 100 visitors. Our main focus of the day was to encourage responsible wildlife watching and behaviour in the outdoors and I hope that we got the message across. 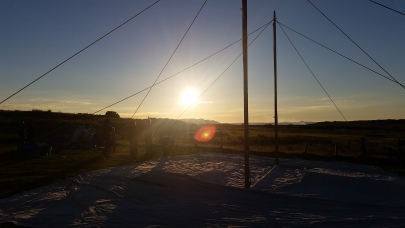 Helping to set up the Show tents!

Overall, the Show was a great success and the Show Dance at night was even better! The band, Trail West, were fantastic and it was a great way to end my time on the Island.

I’d like to thank Emily for offering me the opportunity to live and work on such a beautiful Island and I can’t emphasize enough how much this placement will benefit me as I begin my pursuit of a career in conservation. A special mention also has to go to the local community in the Ross of Mull and Iona. From the first day I arrived I was made to feel extremely welcome. I had no idea when I arrived on Mull that I’d make friends for life and totally fall in love with the Island. I can’t wait to get back!

One thought on “All good things must come to an end!”