Could be what our wildlife is thinking after a very mixed-up season.  Late spring, hot dry weather with the occasional sudden stormy wet day to contend with and now autumn colour seems to be creeping in early.  The Ross of Mull rangers are still here too – not much news from us lately I know, so let’s catch up!

In early June we had a group of enthusiastic volunteers on a working holiday, the National Trust for Scotland’s Thistle Camp scheme, visiting Burg.  A great chance for us to get all sorts of maintenance tasks tackled with many willing pairs of hands.  We had scheduled the camp earlier than usual hoping to survey our rare Slender Scotch Burnet Moths and much to our relief, numbers were the highest for several years.  These small but beautiful insects are only on the wing for a few weeks each June and it seems they have shifted their flight period to earlier in the year.  Most of the feral goats however were nowhere to be seen on our walk around the Ardmeanach peninsula, perhaps they had travelled elsewhere in search of water during this unusual dry spell?  However it wasn’t a wasted day as we were able to make good use of the walk by splitting into groups and one group set up some new plots for the National Plant Monitoring Scheme which will now be checked twice each summer.  The Thistle Campers also tackled repointing work on Burg’s bothy which is undergoing restoration, cleared out ditches and pulled bracken to improve moth habitat and reduce damage to our archaeology.  Many thanks everyone!

The same week Georgia and I led a walk to the fascinating St Martin’s caves on Iona.  A great place to visit as it’s quite hidden away and only accessible at low tide.  Sadly the rain poured down but the few hardy souls who joined us had an interesting time learning about crofting, geology and seaweed!

Georgia has been working on a productivity survey of one of Iona’s shag colonies.  Unfortunately a day of heavy rain amongst weeks of sunshine caught them off guard and lots of nests have been washed away.  Shags do stagger their breeding times so we’ll keep an eye on things to see whether they can rebuild and lay more eggs or whether they’ll give up and wait until next year.

In late June we had another lovely walk along the coast at Carsaig, plenty to see including ringed plover chicks like little balls of fluff on stilts running amongst the rocks, and interesting fossils on the beach at low tide.  It was almost too hot though so some of the group enjoyed going behind a waterfall into the coolness of the cave beyond.

It’s been great having local girl Abbie Cato on work experience with us during the summer holidays.  Living at Knockvologan she was the ideal person to help us out with her knowledge of Erraid on a guided walk around the tidal island.  She’s also lent a hand with several other events including our stand at Bunessan Show and our summer nature club on Iona, for which we had 18 children busy with a treasure hunt learning about what nature does for us, and an afternoon of art and games on the beach thinking about what we can do for nature.  Both Georgia and Abbie are working on their John Muir Awards and have contributed an article to Young Scot’s My Story 365 as part of the Year of Young People. 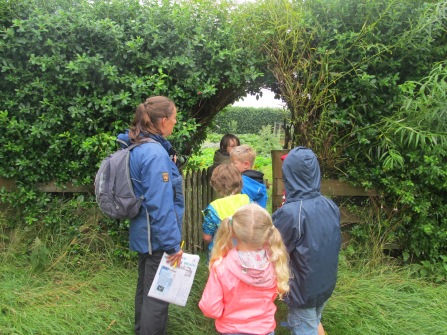 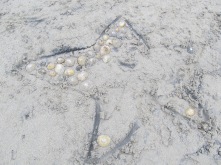 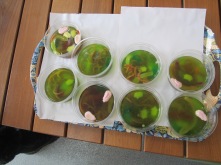 With the warm weather it’s been a good year for butterfly sightings – some of our highlights have been a rare Marsh Fritillary in the office garden, the lovely Scotch Argus and the Grayling with its camouflage pattern on the underside of the wings – and we have been promoting the Big Butterfly Count at our events including our stand at Uisken Games where we were kept busy with sea creature facepainting and making seed bombs and badges.

Our Biodiversity Day in the garden at the Ross of Mull Historical Centre turned up some great moths from our (harmless) trap set overnight, including the stunning Garden Tiger and the less common Old Lady, last recorded on Mull back in 2009!

…looking at history in the landscape around Iona with a lovely American family, plant surveys at Burg, more bird surveys and visiting archaeologists on Staffa (where repair work has commenced on the cave walkway) and leading eagle walks at Tiroran forest and it’s been a very full and interesting summer so far.