Another Summer, another Volunteer Ranger! I’m Emilie, working down on the Ross of Mull with Emily W until mid-August. I’ve only been here a few weeks but already have plenty to report.

Bunessan, my home for the next 3 months.

My first day started quite relaxed, meeting Emily and sorting my paperwork, until about 4pm when we decided the weather was good enough for a midnight corncrake survey. We rushed home, grabbed our camping kit and caught the last ferry to Iona where the birds, declining across Western Europe, have a stronghold.

Exploring the island and eating a delicious pub dinner was a great way to spend the evening, made all the better by views of dolphins just off the coast! When the time came, the survey involved walking up and down the island listening to the birds’ calls and trying to figure out if you heard two individuals or one plus its echo. I’m glad Emily was there; the echoes fooled me more than once. With the survey done my first day was over and we headed to bed, slightly disappointed with the number of birds we’d heard.

The next day was just as hectic as the previous evening. We stomped across the island to find the shag nests I’ll be monitoring for the rest of the summer, then went all the way back to run an after school “nature club” at the island school. In the middle of that I managed to survey the fields to see whether they were being grazed or left to meadow – important information for conserving the corncrakes.

The next few days were slightly easier going. We took a group down to Carsaig, spotting seals and seabirds as well as the fossils the area is known for, then visited Lizzie and Caoimhe, the incredibly knowledgeable Mull Eagle Watch Rangers. Thanks to them I saw my first White Tailed Sea Eagle adult AND watched it feeding its precious chick in the nest.

My first sea eagle, shame about the photographer!

My second week of work was just as extraordinary as the first. Starting on Sunday, Emily and I joined a Thistle Camp – a National Trust for Scotland working holiday group – that had boldly decided to wild camp on the beautiful Burg peninsula. None of us had banked on that day’s  feral goat count being a 9 hour hike, but I’m starting to think that no one gets an easy first day on Mull!

The next day we rejoined the campers to count Slender Scotch Burnet Moths and survey their food plants. These moths are endemic to (only found on) Mull and Ulva, so it’s important that we keep an eye on their numbers. After some initial confusion with six-spot Burnets and cinnabar moths, the group got their eyes in and found hundreds of  individuals across the sites we checked.  The future looks good for these pretty insects.

The camp wasn’t only about survey work. The team pulled bracken, cleared debris from the beach and helped repair the Burg bothy, a structure that will soon be restored its former glory. It was wonderful to join the campers for their final night in the wilderness, sharing their homemade mac and cheese and listening to the stories of the fun they’d had throughout the week. Thistle Camps are a great way to contribute to the maintenance of National Trust properties throughout Scotland – you can find out more here. 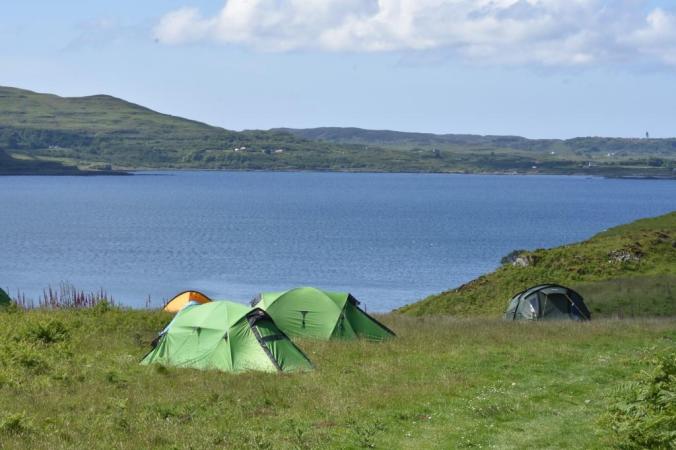 Not a bad place for a campsite…..

I’m not sure how I squeezed everything in, but week two also saw me head to Tiroran Community Forest with the RSPB and other conservation organisations to watch the ringing of a sea eagle chick, and revisit the shag nests on Iona to find that at least 3 chicks have hatched!

Week three has barely begun but is already off to a good start – I visited Staffa yesterday with Peter, the first dedicated Staffa Ranger, seeing bottlenose dolphins as well as the booming puffin population. It was a shame about the rain, but I suppose that’s to be expected in Scotland. We’re returning to the island later in the week to finish the seabird surveys that we couldn’t manage. A Ranger’s work is never done; there just aren’t enough hours in a day!